Meeting the expectations of the photovoltaic market

A movable mounting structure allows the modules to be positioned in relation to the current direction of the sun's rays during the day. This makes it possible to significantly improve the energy output of the system.

Corab, a leading European manufacturer of photovoltaic solutions, offers a special model of a tracking system. The device was presented to an international audience during the InterSolar Europe fair, which took place in October 2021 in Munich. Solutions proposed by Corab met with recognition and resulted in the first orders for the device being placed. The interested parties, representing investors from several continents, will use photovoltaic trackers created by Corab engineers on their photovoltaic farms. 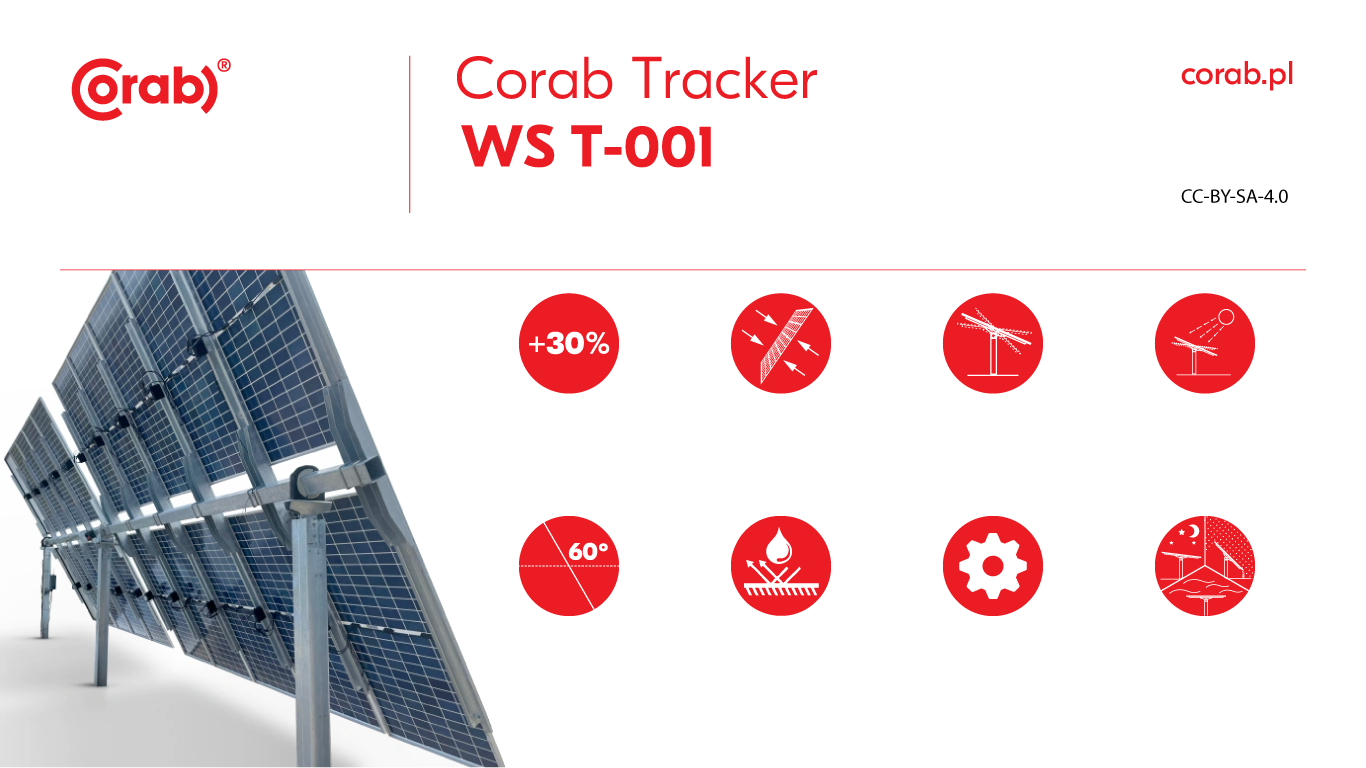 Tracking systems can be divided primarily according to the number of planes in which the photovoltaic modules move. Single-axis and dual-axis systems can thus be distinguished. The former, as the very name suggests, only rotate in one plane. In the morning, the modules are oriented towards the east, where they start their journey to further rotate towards the south during the day and head towards the west in the evening. The angle relative to the ground surface is not adjustable. Two-axis trackers allow movement in two planes. Not only do they rotate from east to west, but at the same time the angle of inclination of the panels relative to the earth surface is to be changed, thus further enhancing performance.

When differentiating between the types of tracking systems, the control system deserves some attention as well as since it can be based either on established mathematical models or on sensors. It is also possible to control the position of the tracking system by searching for the maximum power point and positioning the tracker in such a way that the PV modules achieve the greatest power.

- The CORAB TRACKER WS T-001 system can track solar radiation through the optimal positioning of modules. The whole system is fully automatic and maintenance-free. Among other things, the system is distinguished by slide-in installation, the possibility of using any PV modules, and the use of an advanced system of weather monitoring sensors. ‘All this is done to achieve maximum yield from the installation,’ says Paweł Wiktorowicz, Sales Support Manager at Corab.

The device offered by the Olsztyn manufacturer works well regardless of weather conditions. Be it gale, fog or heavy rain, tracker WS T-001 automatically switches into the most suitable and safe mode. Additionally it can use rainwater to wash the installed photovoltaic panels. It is worth stressing that the Corab offer includes bifacial modules of the Encor brand, which cooperate perfectly well with a tracker and achieving the desired effects from the operation of the tracking system.

‘We have developed a system characterized by an outstandingly small number of components, in result, it is failure-free and durable. Our R&D department has implemented solutions thanks to which the tracker adjusts the modules to the actual solar radiation,’ Paweł Wiktorowicz points out. As he adds, the WS T-001 model has been tested for operational safety, which is confirmed by CE and TUV safety certificates. Good resistance to corrosion of a tracker covered with a special Magnelis coating is also important.

Where do bifacial modules work best?

A photovoltaic farm? A large flat roof? Where will you get the most out of bifacial PV modules?

Better yield - the advantage of the photovoltaic tracker

What are the main advantages of using trackers? The main advantage lies in obtaining a higher energy yield. According to the manufacturer, for central Poland, the use of the tracker is associated with an increase in yield of approximately 29% compared to an optimally installed ground-based system.

It is worth emphasising that Corab has run independent research on trackers. According to the opinion obtained at the Institute of Fluid-Flow Machinery of the Polish Academy of Sciences: “Yearly, a tracking system with bifacial modules can generate between 22.6 and 28.4 per cent more energy than a fixed-angle system with single-sided modules.” In an era of galloping electricity prices, these figures are very impressive.

You may also enjoy

Corab E-Wholesale and Configurator: Shopping has become even easier

Corab at Intersolar 2022 Exhibition: Strong offer for farms and businesses